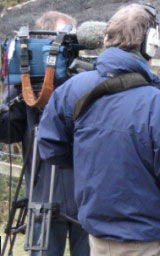 Carol Longman was the Head of Media and Communication for Dorset Fire and Rescue Service for nearly ten years. She also held strategic media and PR roles within police and local authorities across the southern region since 1995 and now concentrates on her private PR, copywriting and media training company, Way Ahead Media Ltd. Before the wonderful world of public sector, Carol held a variety of PR, event management and marketing roles within the private sector for both individual and commercial clients including golf clubs, property maintenance companies and stately homes to name but a few.

Carol has worked closely with the media on a local, regional and national level for the last 20 years, developing key links with hundreds of media representatives across the UK.  Her media relations expertise therefore forms the foundation for much of her media training activities, having a truly excellent relationship and understanding of the Press.

Her understanding of the media arena also underpins her public facing PR and marketing work, advising clients on everything from advertising to maximising business potential through simple, cost-effective social media and other networking activities.

Paul Erlam has several decades’ experience in the media – both in broadcasting and print. For ten years he was producer and latterly editor of Meridian Tonight, the regional ITV news programme for the south. Previously, he had a similar position with Thames Television. He has worked both on daily news programmes and produced documentaries. He has worked for several Fleet Street newspapers ranging from the Sun (pre-scandal!) to the Daily Telegraph as both a staff reporter and freelance contributor. During his broadcast career he has produced TV programmes on major incidents including the Kings Cross tragedy, the Marchioness sinking, Paddington and Southall rail crashes, and the Foot and Mouth outbreaks.

For the past few years he has concentrated on media training and crisis management with a number of high profile organisations including fire and rescue services, private sector companies, Government departments and agencies, as well as international sporting associations and clubs. Paul was also heavily involved in media preparations for the last Olympics. In addition to this, Paul is the editor of an on-line specialist news website.

Carol Longman and Paul Erlam are the two primary course leaders. Additional trainers are then drawn from a pool of highly experienced broadcast journalists, based upon course requirements.